Measuring the effect of osteopathic care for patients is an important part of daily practice. The EFFO has funded a pilot study to support the collection of Patient Reported Outcome Measurement (PROM) data across Europe…..Read more about this study.

The growth of an evidence-informed culture in healthcare has been increasing in the past decade. This has been important for many reasons including providing information to patients, clinician reflection, and supporting dialogues with government or other regulatory authorities.

Evidence exists in many forms from randomised controlled clinical trials to day-to-day data collection. The use of Patient Reported Outcome Measures (PROMs) to collect information directly from patients about the effects of osteopathic care by an independent research organisation is an important form of evidence for osteopaths in the United Kingdom (UK) and mainland Europe.

The PROM pilot undertaken by three European countries (Belgium, Germany, and Switzerland) was modelled on some earlier work carried out in the UK. PROM data are collected using an app suitable for mobile devices (including smartphones and Tablet computers) and the Internet (online data collection).

The data collection process involves patients being asked if they would like to participate in the data collection process, if they agree they are given a participant information sheet and a code. Patients can submit data through completion of a questionnaire prior to their first appointment or as close to it as possible (baseline data). They will then receive follow up questionnaires one week after treatment, and six weeks after their initial treatment.

A summary data report is generated after 50 completed datasets (baseline, one week, and six weeks). The report provides demographic information about patients attending for treatment, their waiting times, the nature of presenting symptoms, and the duration of their symptoms. Outcome data are collected using the Bournemouth Questionnaire (this Patient Reported Outcome Measure or PROM asks for information about severity of symptoms and impact on aspects of daily living) , questions about patient satisfaction and experience, and about patients’ overall response to treatment (global change).

Findings from the pilot have shown that the questionnaires were well-completed, and the data suggests good responses to osteopathic care. Patients in the pilot study indicated that 89.5% reported being very satisfied with osteopathic care at 6 weeks post-treatment, 84.2 % reported care was very good at the same time point. A total of 97.1% of patients reported some improvement at one week post- treatment, and 84.2% reported being much improved or completely recovered at six weeks post-treatment. 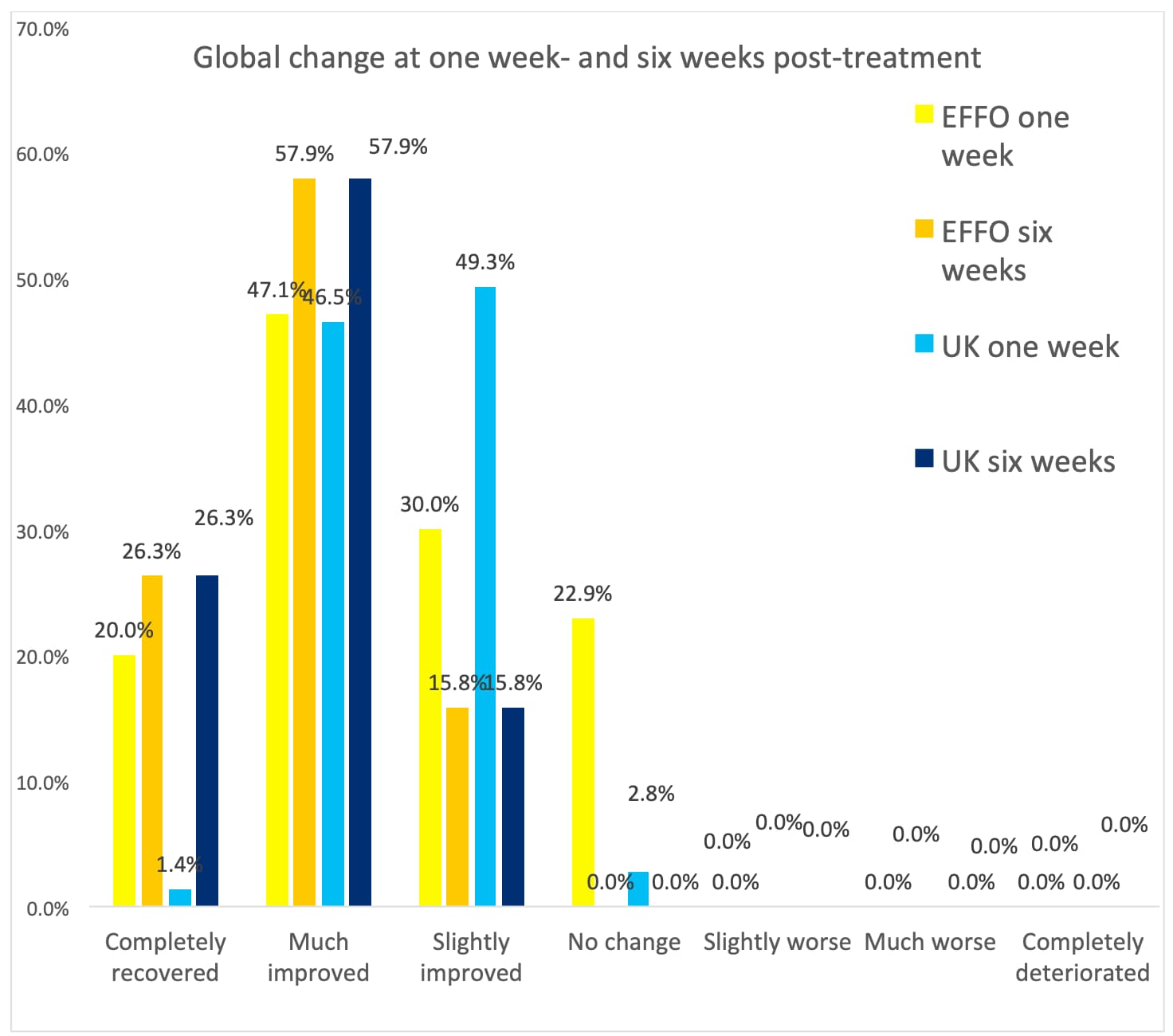 The pilot process will be extended to include more European countries from 2019 onwards. This will involve translation of the Bournemouth Questionnaire into different European languages following a recognised process (https://www.who.int/substance_abuse/research_tools/translation/en/).

The PROM data collection process continues in the UK and just over 2000 datasets have been collected to date (April, 2019).